Up on the blog today we are diving into some color theory and getting into the evolution of the color Pink.  So much of the history of Interior Design has been influenced by fashion. If you’re an interior designer, or simply interested in interior design, you’re likely up to date on the latest home trends. You know which layouts help optimize a space, which colors collaborate to create and harmonize a beach theme, and which patterns help accentuate a room. But what you may not realize is that many of the interior trends you’ve become familiar with have originated from fashion, and what you see on runway shows eventually trickles down into homes around the world.

Pink as always been one of my favorite colors.  As soon as I was given the choice of what color to paint my room, I chose "blush".  Apparently I was ahead of my time because my parents came home from the paint store with lavender because they didn't have blush!

One of the earliest appearances of the word “pink" occurs in writer William Painter's, The Palace of Pleasure. Here a character rhapsodizes about an object of his affection: "that sweet breath which spirit through the delicate mouth even as I do smell the roses, pinks and violets hanging over my head” pink is another word for the Dianthus Plumaria flower, which grows in a variety of pale red shades.

Aristocrats in Europe go nuts for pink, especially when it comes to dressing their babies. The shade is more popular for boys because it seem as a less intense version of red, the color of war. 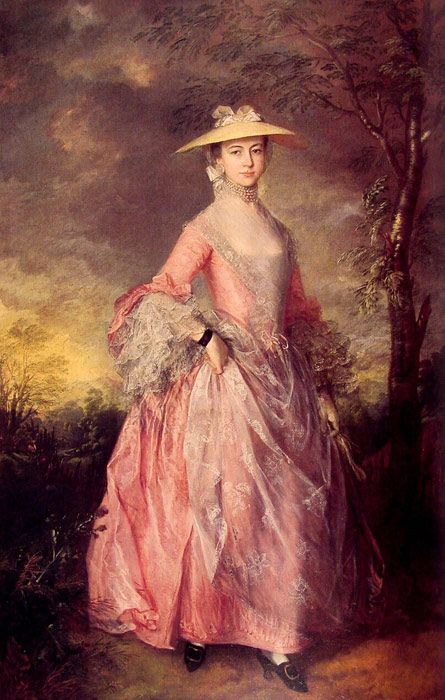 Many buildings in Jaipur, the capital of the Indian state of Rajashstan, are painted a dusty rose to Harold the arrival of Prince Albert. In northern India, pink is associated with Spring, and Sikh men often wear pink turbines for wedding ceremonies. 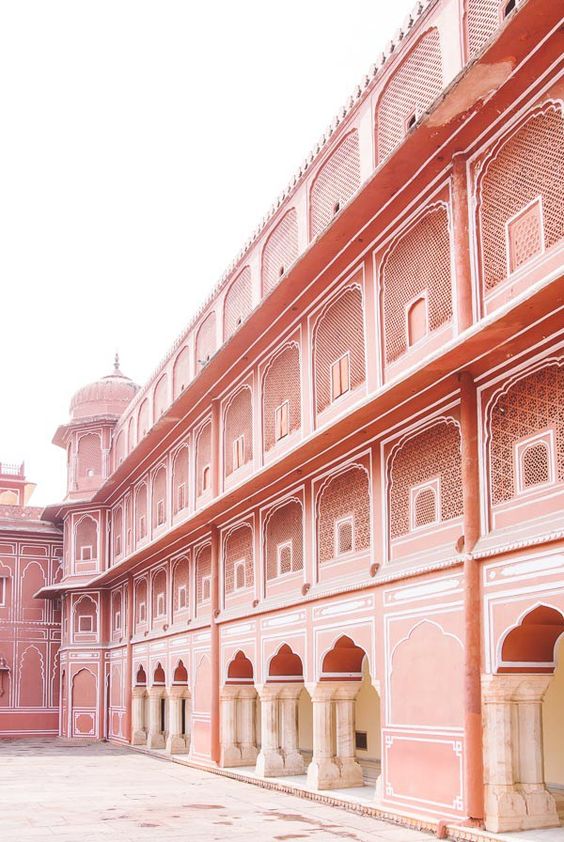 Couturier Elsa Shiaparelli creates a bright magenta she calls “shocking pink“. It’s made up, she says of all the light and the birds and the fish in the world. Western society has now undeniably moved away from “pink is for boys“ although as recently as 1918, an article from trade publication Earnshaw‘s infants department, dictates pink as the generally excepted well for boys… Being a more decided and stronger color.“ 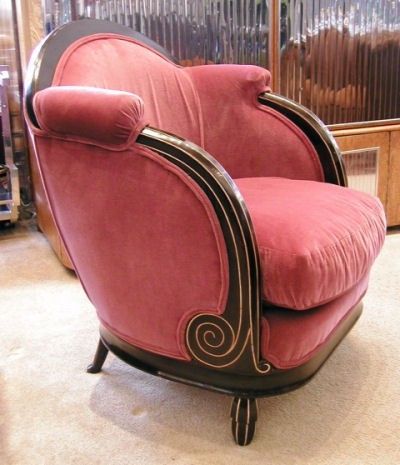 Research giant scientist, Alexander G Schauss proposes that pink paint on the interior walls of a prison could potentially make male prisoners less violent. He creates "Baker Miller Pink, a salmon shade named for two of his colleagues. Anecdotal reports seem promising, but later studies don’t hold up with the scientific community. The fashion community, however, does not get the memo: in 2017, Kendall Jenner paints a wall of her home the exact shade and posts about it, writing: "Baker Miller Pink" is the only color scientifically proven to calm you and suppress your appetite.“  We believe in the validity. 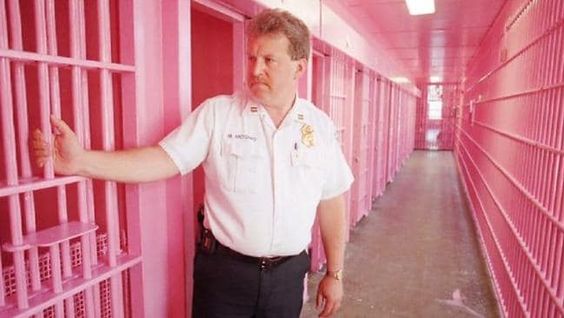 The day after Donald Trump’s presidential inauguration, thousands around the world march in protest wearing pink knit “pussy hats“ created by Jayna Swayman and Krista Suh. Their goal is to create the image of a “see of pink showing we stand together, united“. 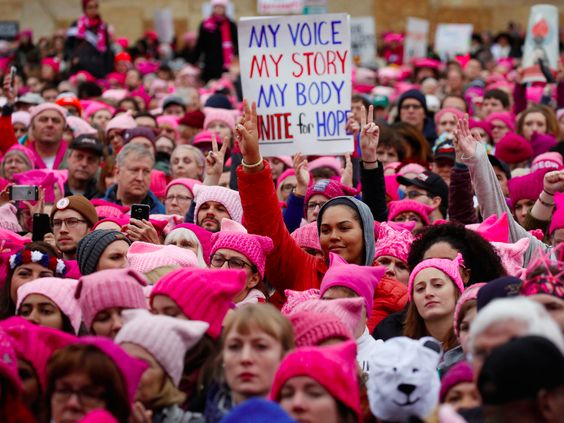 Pink is everywhere. On the fall runways, it’s swept across lids and caked in onto lashes. It’s infused into glitter and brushed through the hair. It’s the color Nancy Pelosi wore  to be sworn in as speaker of the house. In the immortal words of Janelle Monáe: “pink is where all of it starts… Pink like the halls of your heart.“ Pink means power and so much more. Below is one of London's most instagrammable restaurants.  The Interior Design is decidedly pink! 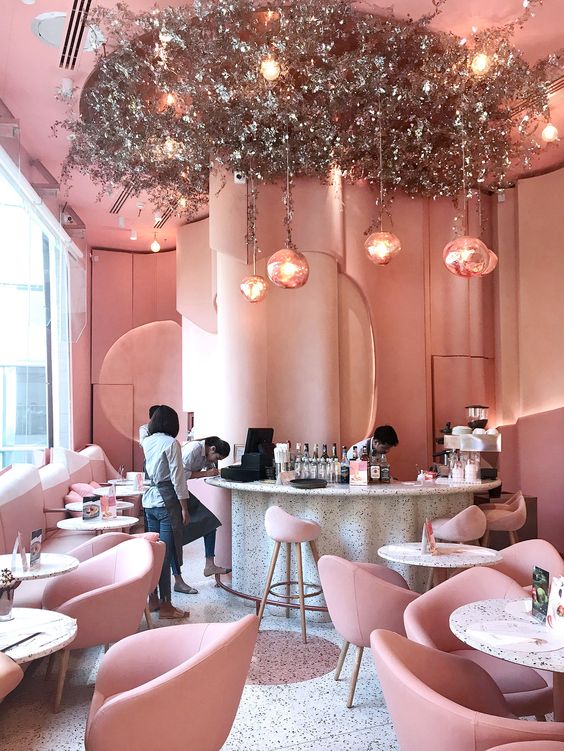 In addition to hospitality design, we also design multi family development projects, other commercial spaces such as offices and retail spaces, and fitness center projects.  We work here in Philadelphia, the main line, the tri state area and Nationally!  If you enjoyed reading this piece please leave a comment and let us know.  AND, let's get social.  Follow us on Instagram, Facebook, Twitter and connect on LinkedIn!

Tina Delia, a native of Ocean County, NJ, current resident of Philadelphia, is the Founder and Principal Interior Designer of Delia Designs. For the past nine years, Tina has been steadfast in her vision and continues to develop herself personally and professionally. She is dedicated to excellence and insistence on forward thinking design.

At the forefront of her designs is the idea that our spaces have the ability to transform our lives.  She is looking to move us, inspire us to see, think and create freely.  After all, it's not only about creating beautiful spaces, it's about touching the lives of the people who live, work and walk through those spaces.

Eleni Palamidis, a native to Philadelphia, is currently a student at Community College of Philadelphia and will be transferring to Moore College of Art and Design in the Fall. She has always had a passion for interior design and creative ventures. While at Moore she will be pursuing a major in Interior Design with a minor in Graphic Design and Business.

Growing up in the Greek community has shaped Eleni to be the person she is today.   She has been fortunate enough to have visited many of the islands in Greece, to which she credits her love for Architecture. Eleni hopes to one day open her own Interior Design studio and continue to do what she loves. 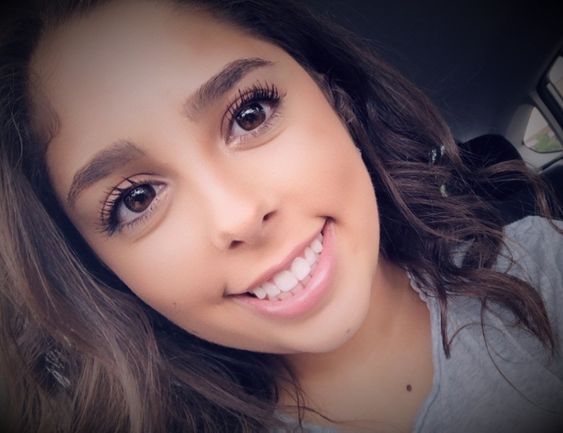